I am sitting on board a Twenties Belmond steam train, chugging into the English countryside.

I could tell you that the hills are rolling and the fields are lush. But the truth is, I hardly notice. Because I’m not here to admire the scenery. I’m here to talk about Agatha Christie.

There could hardly be a more appropriate setting to do so, amid the polished art deco fittings. I keep expecting Hercule Poirot to pop his moustached face round the carriage door.

That he doesn’t is probably something of a relief to my fellow passenger, Dr Anna Farthing, the new director of the International Agatha Christie Festival, which takes place in Torquay from September 11 to 20. Newly backed by the Arts Council, what was once a slightly sad-sounding affair is being transformed into a multi-sensory extravaganza to celebrate the author’s 125th birthday. 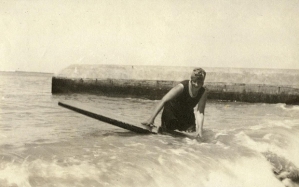 And it’s not the only thing getting a makeover. Imagine Christie and you probably call to mind her most famous female character, Miss Marple – a doddery old lady, grey-hair curled neatly around her face.

Agatha Christie as we imagine her (The Christie Archive)
This is the image of Christie that endures. But it is no longer the version that Farthing wants the world to see.

According to this director and academic, it’s high time we rewrote the story of Britain’s most successful female literary export – the most widely published author of all time (her estate claims she’s been outsold only by the Bible and Shakespeare).
Because, when all’s said and done, Agatha Christie was, well, a bit of a goer.

Hers is a life that will resonate with many women. She might have been born into middle-class comfort, but she became a working, single mother who faced sexual betrayal and so many of the heartbreaks and hardships familiar to us today.

Agatha Christie should probably be considered a feminist icon. The “Queen of Crime” might have been born a Victorian in September 1890, but she rarely behaved like one.

A plucky young woman, she threw herself into the war effort – training to be a nurse and enlisting in the VAD (Voluntary Aid Detachment). In Torquay’s makeshift hospital, she tended the wounded and cleaned up after amputations. “I would wash all the blood,” she wrote, “and stick [the limb] in the furnace myself.”